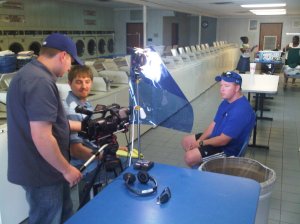 Bluefish.tv came and talked to a couple of our folks for a new small group Bible Study for Bluefish.tv.

If you’re available, we’d love to have you come out and help join us care for our community on this special night.

Word is the video series will be out early summer. We’ll keep you posted.

It’s also the 146th anniversary of the day our 13th Amendment was introduced to Congress — which set out to abolish slavery in the United States.

Yet today — slavery still exists — in so many forms.

Sex trade, immigrant farmers working in Florida, children mining for coltan, chocolate and coffee farmers around the world — and so much more.

We encourage you to do a 5 things today…

1. Change your Twitter/Facebook/MySpace avatar to support One Voice to End Slavery:

2. Join One Voice to End Slavery

3. Visit the Human Trafficking section on Change.org and read at least 5 articles

Then let us know what you learn.

What impacted you the most? What did you learn when doing one (or all) of the steps above?

What other steps have you taken to end modern day slavery?

Laundry Love People in Sulphur Springs, Florida has put together a new video highlighting their local Laundry Love. Check it out…

Our next Red Oak Laundry Love will be July 25th from 6 to 8 p.m. Bring a friend and come join us.

A new name and focus

The idea comes from the folks at JustOne and we’re happy to join with them in this change.

The reasons for the change are simple….

We hope this change helps us and others put even more emphasis on the people we hope to serve and we hope it helps us all get past the idea that people can be treated as projects or causes.

We look forward to what’s to come! Will you join us?

We now have a profile on Groupable.com in order to help facilitate new sponsors for our monthly Laundry Love Project. You can find out more — and become a sponsor at http://groupable.com/GroupProfile/laundry-love-project.

Just a heads up though, if you’re interested in sponsoring us as an individual, check out our donation page. Groupable is much more geared and targeted towards corporate sponsorship.

About Groupable:
At Groupable, our mission is to help groups find sponsors so that you can keep doing what you love, with help.

We had our first Laundry Love Project tonight in Glenn Heights. Quite certain we all had a great time.

Four of us served up laundry for a number of folks.

We estimate we served up 14 loads of wash, 16 loads in the dryers and met some new friends along the way.

Here’s a quick video of Rodrick, one of those new friends, who breaks it down for us with the Shane-O-Mac dance.

We hope to add more thoughts, video and photos in the coming days and we’re already looking forward to next month!

We hope to use this as a quick and easy place for folks to find out about the local Laundry of Love Project as well as what others are doing in the area and nationally.

Our first LLP is scheduled for May 30th from 6 – 8 p.m. We’d love to have your help by either joining us at the Laundrymat or by supporting us with financial donations, or by donating laundry detergent, snacks or drinks for the participants.